Debian GNU/Linux and Mac OS X on my iBook 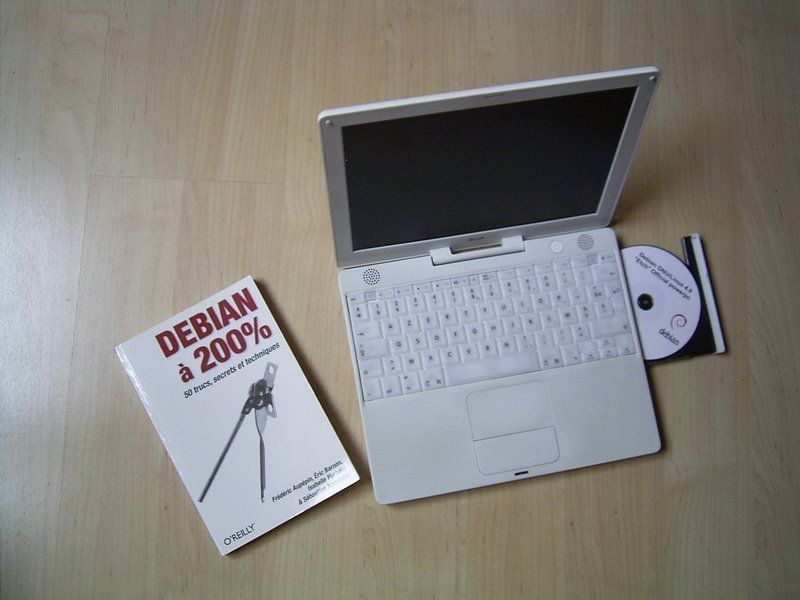 Why am I creating two hfsplus partitions ?

Congratulations ! Debian GNU/Linux 4.0 "etch" is installed and running :) . But there are still things to do...

Keyboard at the console

At the console, my Belgian keyboard is properly recognized. That is, if you selected the right keyboard in debian-installer :)

In X11, my Belgian keyboard works *almost* perfectly. The only problem is the key in the upper left corner, just below the "Esc" key. In X11, when I press this key I get ² and ³ instead of @ and #. The solution is to set Option "XkbModel" "macintosh" in xorg.conf, as told in hack #4, page 15, in the book Debian à 200%. But, it does not work !. See below the detailed xorg.conf file.

Ouch, how do I right-click ? The trackpad on the iBook only has one button !

Indeed. And unlike in Mac OS X, Ctrl-Click does not work ! The first solution is to use a USB mouse with both left and right buttons. But of course that's not very easy when you're using your iBook, say, in the subway, or in bed. The other solution is to define two keys as middle-click and right-click in X. (In my case F10=middle-click, F11=right-click) In order to do so you just need to add the following lines to /etc/sysctl.conf:

So you've got these F1 to F12 keys that also have special functions: brightness control, sound volume, and F12 to eject the cdrom. How do you get these to work in Debian GNU/Linux ? Easy as π:

Mac OS X on the iBook does a very good job of managing power. This means, changing the speed of the CPU on the fly (making the CPU run at 400 MHz instead of 800 MHz), turning off the brightness of the LCD screen, and putting the iBook in sleep mode after some time. Can you do that in Debian GNU/Linux ? Of course you can ! And it works very well, you can close the lid, and open it a few hours later, it will come back in the state it was. You'll just need to:

One of my most favourite features of Mac OS X is exposé. It is very useful when you've got like a dozen windows open. Would be cool if there was exposé for Debian GNU/Linux. Well, there is, more or less ! It's a KDE tool called komposé. It will show you all your windows as thumbnails. Alas, it will not do a graphical zoom out. To install it, you'll just need to ... you'll then just need to configure my keys. In my case I chose F9 for a komposé of the current virtual desktop and F10 for a komposé of all virtual desktops.

Why is the data partition formatted in hfsplus ?

After this failure (*sigh*) I thought of another solution: hfsplus. I formatted the data partition as hfsplus in MacOSX. Then I added a line to my /etc/fstab in Debian GNU/Linux (see the last line):

With this setup, the /mnt/data filesystem will always mount as read-only in Debian GNU/Linux. When mounted, the kernel will always say: Forcing write access is NOT a good idea ! Don't do that ! There is another solution: disabling journaling on the hfsplus filesystem in Mac OS X.

(where /Volumes/Data is the volume name of your hfsplus filesystem). For more information about disabling journaling on a HFS volume, take a look at this article from apple.com

After this little change, the Linux kernel with automatically mount that partition in read-write.

Getting the external VGA output to work

I sometimes have to give presentations. So I've got a Mini-VGA to VGA adapter, and I connect my iBook to the beamer. In Mac OS X, I do get output on the external VGA port.
But in Debian GNU/Linux, it does not work ! I get zero output on the beamer !
Now it works ! See below the detailed xorg.conf file.

The iBook G3 has three network devices: onboard Ethernet, FireWire, and AirPort (if installed). @
All of them work of out of the box on Debian GNU/Linux ! There's nothing to do ! For completeness, I'll just say the onboard Ethernet uses module sungem AirPort uses modules airport, orinoco, hermes and FireWire uses ieee1394, eth1394.
I like to have Ethernet as eth0 and AirPort as wlan0. Here's how to achieve this with file /etc/udev/rules.d/z25_persistent-net.rules:

You can also take a look at my other hacks.

This page has been visited